It was a nice day leaving Buzzards Bay headed for Point Judith Rhode Island.  We got up early planning to take some time at Pt Judith for Boat maintenance, laundry, and those $6.50 Lobster tails.  It got a little rough about 6 hours into the run with the wind picking up to 20 knots, with 8 foot rollers.  The weather was forecast to be sunny with light 5 to 10 knot winds.  WRONG  We left at about 6:30 AM figuring to arrive at Pt Judith at about 2:30 PM.  It was about a 45 mile leg and that should get us there early in the afternoon.

We were about 10 miles from Point Judith when we lost a pin on the Genoa.  The large sail at the front of the boat.  So we had to take that one down and just stick with the motor.  Then at about 8 miles from Point Judith at about 1 PM the engine started to sputter and quit.  So we were out in rough seas again without a motor again and just drifting.  We had to call the Coast Guard and inform them of the situation and then we called Seatow again.  The better news we had learned our lesson 2 days earlier we had put special Towing insurance on the boat.  We couldn’t afford to pay that bill again so it was covered.

It took 1 1/2 hours for them to come to our rescue, meanwhile we drifted almost to the entrance of Pt Judith.  But they hooked us up  and towed us into Pt Judith. 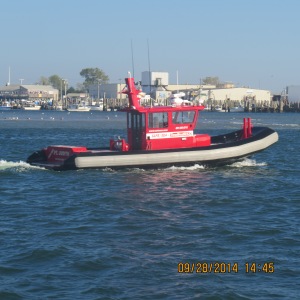 When we talked to the manager of the Marina he said that older (33 years in our case) aluminum diesel tanks can build up contamination in them and he recommended we replace it.  With all the issues we have had I wish someone would have recommended we do that before.  Apparently when we hit the rough seas and we got low on fuel, half empty, the shaking of the boat mixed up the sludge on the bottom and sucked it into the fuel filters which plugged up and starved the engine.

The decision to change the fuel tank came on Friday AM and we could not order the fuel tank until Monday.  Hopefully it will get here in one day and we can install it on Tuesday and get going.

I decided I would remove the old fuel tank and get the engine running myself this weekend while we wait on the new fuel tank.  So I worked on removing the fuel tank. 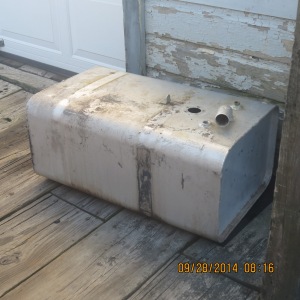 This is the fuel tank out of Adventure

These are shots into the tank after I took it out.  I pumped out 9 gallons of diesel first and there is still about a gallon left in the tank after that.  Diesel is a red color but notice all the black stuff in the bottom of the tank.  That is what got pumped into and then blocked the fuel filter.

After removing the tank I used a gerry can and put the fuel line into that for a temporary fix until the new fuel tank arrives while we got the engine running.

We then replaced both fuel filters and then had to bleed the lines of air and get the engine started.  We had problems bleeding the air out of the lines but we finally got it started at about 10:30 AM Sunday morning.  So now we are waiting on the new fuel tank to put that in.  I was surprised the fuel tank is $275 much less than my imagination had thought it would be.

I have to say the manager Don and the office manager Ann have been great and are cutting the dock fees some to help us out.  Don has been the key to guiding us through the replacement and bleeding air out of the lines.

Tom I hope you read this one.  You suggested replacing the fuel tank last winter.  That would have saved us a lot of money and aggravation.

One thing that has been great is Tammy is really mechanically inclined.  She just hasn’t had a call for it before.  We have been working together through the entire trip fixing things that we need to.

It was difficult and not a planned part of “Living The Dream” but it was an experience we shared and the joy of doing it together is Truly the Dream.

I have to thank Tam for her courage when I was down for holding me up!

“One half of knowing what you want,

is knowing what you must give up

before you get it”

One thought on “Trouble from Buzzards Bay to Point Judith”